The new version of the Livik map, the collaboration mode with EVANGELION, and the buff for shotgun weapons can already be played in PUBG MOBILE version 2.0.

PUBG MOBILE officially entered version 2.0 along with the inauguration of the Livik game map and collaboration with EVANGELION . All players can update to the latest version starting May 13, 2022 .

Is there new content in this version 2.0 update ? Here's the discussion! 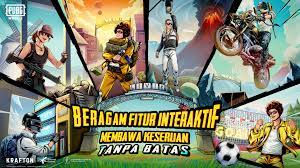 After undergoing a beta period for months, the Livik map is finally ready to be officially released on PUBG MOBILE starting May 13, 2022 .

Even though it includes a small 2×2 game map, Livik comes with a new design and fun attractions that provide a unique gaming experience for players.

In terms of gameplay, the Livik map now offers various features that were not in the beta version , namely:

One of the most awaited collaborations, PUBG MOBILE X EVANGELION will finally kick off on May 14 – June 19, 2022 .

In addition to a row of cool skins from the EVANGELION anime, PUBG MOBILE players can also play a special mode while watching up close the battle between 6th Angel and EVA Unit-01 on the Erangel and Livik maps.

Are you a Buggy and Monster Truck lover ? You will definitely like the newest vehicle that is present in this update , namely the Utility Task Vehicle ( UTV ) . With a capacity of 4 passengers , this tough car can run smoothly on any battlefield.

Let's try the toughness of this car in Livik !

The direction of the Play Zone is not what you predicted? No need to worry about missing the zone, now you can use Emergency Pickup to call an emergency plane that will take your squad straight to the middle of the Play Zone .

You can also choose to jump anytime and anywhere when you see a safe location to land. Let's try this feature on Erangel and Miramar , Ranked or Unranked mode !

Shotgun is one type of weapon that is currently less popular among players. Although very strong in close combat, players prefer SMG and AR as their mainstay weapons.

In this 2.0 update , PUBG MOBILE intends to strengthen shotgun weapons by providing a number of buffs. Here are the details:

Recent adjustments have also been made to the ranking system . From the previous 5 levels, now the Bronze rank only consists of 3 levels (I/II/III) while Silver has become 4 levels (I/II/III/IV), making it easier for new players to reach Gold rank .

Had difficulty pushing rank in the previous season due to rank restrictions ? Don't worry, because in this new season, the gap in forming teams between ranks has been relaxed to: Bronze – Platinum and Gold – Conqueror .

Upgrade your Royale Pass to Elite Pass or Elite Pass plus to get various limited prizes such as weapon skins SCAR-L , M16A4 , UMP45 , Elegant Finesse outfit set , as well as the main prize of Purity Defender outfit set .

In order to try this latest version, players must update 50MB for iOS devices or 36MB for Android devices .

So what are you waiting for? Update your PUBG MOBILE app and try all the new content!

Visit the official PUBG MOBILE website or watch the following video to find out more information about PUBG MOBILE Version 2.0.