For those of you who have played several World Quests on The Chasm , you must be familiar with Zhiqiong. Yep, he is an NPC who has an important role in The Chasm. Well, one of his quests , Valor's Afterglow, is very popular among Travelers.

For information only, this Zhiqiong quest is divided into several parts. To be clear, let's look at the following reviews from Gamedaim . But before that, don't forget to share this information with your friends too. 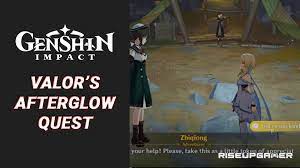 First, you have to make sure that you have completed the Chasm Delver quest to be able to start Valor's Afterglow. This is the only requirement to be able to open the World Quest.

To start the first quest of the series, visit the camp located east of the Glowing Narrows and interact with Zhiqiong. The first quest is rather simple as players have to place five measuring beacons in five different places. These locations are:

After the server is reset, return to the camp and Zhiqiong will not be found anywhere. You have to interact with Jinwu first. Travelers will be asked to find Zhiqiong who escaped to one of the beacon gauges.

Players don't have to search everywhere, instead head straight to the site located south of Stony Halls. Travelers will find Zhiqiong trapped in the dark mud and surrounded by monsters and must fight against them.

Defeat the monsters and teleport back to the camp. Travelers had to interact with Zhiqiong and Jinwu several times. After that, Traveler must give the soup to Zhiqiong made by Jinwu.

After the server was reset, the player had to return to the camp and talk to Jinwu only to find out that Zhiqiong had left the exploration team. To complete the quest, the Traveler only needs to talk to Muning on the surface of The Chasm. However, to get the Valor's Afterglow achievement, Travelers must find Zhiqiong's final location.

Just go to the location shown in the image above to find the abandoned camp. After investigating, Traveler will find Zhiqiong's letter and Frostglaze Crystal. With this, Travelers will also get the “Valor's Afterglow” achievement in Genshin Impact.