Guide to Quest Lost in a Foreign Land Genshin Impact

Lost in a Foreign Land Genshin Impact is one of the quests that appeared after v2.6 was released a few days ago. Furthermore, this quest would take at least 2 days. Because, the quest requires players to wait for the reset first.

So, how to complete this one quest ? Let's see the following article until it runs out Traveler . Don't forget to share this information with your friends too. 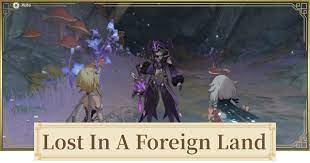 Lost In A Foreign Genshin Impact |

To start the Lost in a Foreign Land Genshin Impact quest , Travelers must complete The Chasm Spelunkers to unlock the first mission of Lost in a Foreign. If Travelers meet these requirements, then they only need to go to the Waypoint in The Glowing Narrows.

After defeating the Electro Cicin Mage, you can talk to him. After the dialogue, several Floating Fungi will appear from nowhere. So, beat them to continue the quest.

You will later be asked to go to the marked camp. So, Travelers can easily find it. Katarina, the name of this Electro Cicin Mage will be there and talk to her. You will get 30 Primogems after solving their problems.

After the Daily Reset, return to Katarina at her camp. He will ask Traveler to find some clues left by Nikolay. Head southeast of The Glowing Narrows. There is a tunnel and use Lumenstone Adjuvant on the nearby Oozing Concentration.

Travelers must look for clues in the form of a diary. This book is southwest of the Oozing Concentration. Interact with him to get to his next destination. This destination is marked on the map, so head over there and defeat the Ruin Guard.

Corporal Nikolay's Diary is near the hay, so interact with it. Travelers will receive a Bloody Sergeant's Insignia. Return to Katarina to complete the Lost in a Foreign Land Genshin Impact quest. Get 30 Primogem after completing this quest .