Garena Free Fire has announced its partnership with the popular triple-A game, Assassin's Creed, which was previously shown through the schedule of upcoming events and prizes associated with the title The Creed of Fire . This new event features exclusive Assassin's Creed themed rewards that have been added to the game.

The Log-in Event started on February 28th. However, the Assassin's Creed Collaboration appears to have been extended to March 13th. Of course, this includes free and paid events that will present various prizes such as Pet Skins, Weapons, Outfit Bundles, and many more. 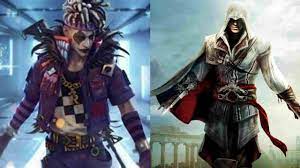 Players can use these Coins to unlock rewards by completing 7 target lists. After successful completion of one, the next target will be unlocked and so on until all target lists are complete. Each target has its own set of rewards. Here's the full list:

The exclusive Top-up event is no less interesting to be introduced into the game on March 4-9, 2022. This feature presents the exclusive melee skin 'Hunter's Blade' for 200 Diamond. Meanwhile, players can get the Creed Slay Emote by spending 500 Diamonds.

In this section, players can get four different rewards for each completed kill target. The event will take place from March 4 to 8. Here is the complete kill target:

In addition to target kills, players can also complete target Booyah to get an exclusive weapon prize, namely P90- Metal Wings. This event is available March 9-14 and features Cart of Hay, Scan playcard, Gold Royale Voucher, and P90 skin. each prize for 3,5,10, and 20 Booyah.

The event also added a section in Luck Royale featuring the eight grand prizes and other prizes. Each round in this event costs 40 Diamonds, while round 10+1 costs 400 Diamonds. The main prizes in Luck Royale are as follows:

In addition, other prize pools such as weapon chests and Hooded Darkness tokens are also available along with the main prize. On the other hand, enough tokens can be used to redeem one of the main prizes. This event is rumored to only be available from March 5 to 11.

What do you think, Esports Friends? are you ready to have your dream Assassin set and become the greatest Assassin's in Free Fire?