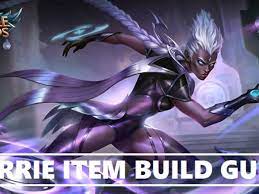 Karrie is a Mobile Legends hero who occupies the Marksman role with a specialty. After getting a revamp some time ago, Karrie's popularity immediately increased quite rapidly. This is supported by his increasingly sick Damage . Even so, you still have to know Karrie's build recommendation is sick.

Maybe you already know that Karrie is known as a rhino hero slayer Marksman or thick blooded. If the enemy chooses Esmeralda , Uranus, or another Rhino-blooded Tank hero, then the counter hero is Karrie. Moreover, Karrie has quite a lot of damage in the early game.

When the game enters the late game, Karrie can be a differentiating hero for the team to win. His agile movements made him definitely difficult to catch, let alone kill. It can be said, Karrie is a Marksman hero with a fairly high Attack Speed .

Well, before discussing further about Karrie's recommendation to build the sickest in Mobile Legends . It's good for you to listen to the discussion below first.

Please note, Karrie has a skill range that is not too far away. In addition, the skill attack is only a single target. The use of the skill is also quite difficult to play for players who are new to playing Mobile Legends. So you have to be smart in playing it.

So, in order to better understand how to use Karrie properly, please refer to the information regarding the explanation of her skills below.

Karrie leaves a "Lightwheel Mark" to the opponent with every Basic Attack or skill. When the “Lightwheel Mark” reaches 5 Stacks on the target, the Lightwheel Mark will become a real Lightwheel, strike the target and deal True Damage equal to 8%012% of the target's Max HP. Damage to Creep is not more than 300.

Karrie moves in the specified direction while issuing a Lightwheel to nearby enemies, dealing 150 (+70% Total Physical Attack ) points of Physical Damage and leaving a Lightwheel Mark/ After entering Dual Woeld Mode, she will issue 2 Lightwheels.

Karrie enters Dual Wield Mode for 6 seconds, during which she gains an additional 20% Movement Speed ​​and issues 2 Lightwheels on each Basic Attack , each Lightwheel dealing 65% Damage .

As is known, Karrie is a hero who relies heavily on Basic Attack . If the item is ready, then Karrie can become invincible. So, for the skill combo, you can use skill 1 combo to slow down the enemy, and continue with skill 2 or 3 to speed up Basic Attack .

Each player, of course, has their own choice of items. Moreover, the selection of items also depends on the situation and the enemies encountered in the game. If you want to use the hurt Karrie build recommendations from Gamedaim Tips , here's the information:

The first hurt Karrie build recommendation is definitely shoes. The shoe item that is perfect for Karrie is the Swift Boots . With this item, Karrie will get an additional +40 Movement Speed ​​and 15% Attack Speed .

The next hurt Karrie build recommendation is Demon Hunter Sword. This item is known as a Tank killer item that has thick blood. That's because DHS will add +35  Physical Attack  and +25%  Attack Speed .

Unique Passive-Devour: Basic Attack will deal 9% of the target's remaining HP as additional Physical Damage (up to 60 against creeps and minions).

In addition, another unique passive Devour: Each Basic Attack deals 3% Physical Lifesteal for 3 seconds. Can be Stacked up to 5 times.

Unique Passive – Divine Justice: Within 3 seconds of using the skill, the next Basic Attack will deal additional True Damage of 60% of Physical Attack with a cooldown of 1.5 seconds. Also when the effect of Divine Justice is active, the hero's Movement Speed ​​will increase by 10%.

In addition to the Demon Hunter Sword, the Golden Staff item is also useful for increasing Karrie's Basic Attack . This item will add +65 Physical Attack and +15% Attack Speed .

Unique Passive Endless Strike: After every 2   non- critical basic attacks ,  the attack speed  of the  next basic attack  will increase by 100% and the effect will be activated by 2 times.

Thunder Belt  is a build that will be very useful for Karrie. Because this item will add +800 HP, +6  Mana Regen , +10%  Cooldown Reduction , and +40  Physical Defense . As we know, Clint is a hero who is wasteful of Mana usage.

As a Marksman hero, Karrie is very vulnerable to being attacked by Physical heroes  . To overcome this, you can use the Wind of Nature item  . Because this item will add +30  Physical Attack , +20%  Attack Speed , and +10%  Physical Lifesteal .

For the best Karrie emblem set in Mobile Legends, it's definitely a Custom Marksman Emblem . With the arrangement of Bravery ( Deals Physical Attack by +4.00 according to level), Mastery (Reduces skill duration with a short time by +1.50%, 3.00%, +5.00%), and talent Weapon Master (Increases Physical Attack of items by 50%) .

Playing as Goldlane, Karrie is very vulnerable to being ganged up by enemy heroes. So, the battle spell that is suitable for Karrie is Flicker . Another spell that's been going viral lately that you can also use is Inspire .