If you have played Genshin Impact v2.6 from the beginning of its release, you must be familiar with a character named Kamisato Ayato. Yep, this DPS Hydro character does get a place in some Travelers . Well, on this occasion Gamedaim will try to provide a review of the Kamisato Ayato Build.

However, before entering the discussion regarding Kamisato Ayato. We remind you to share this information with your colleagues as well so they don't miss the latest news about Genshin Impact. 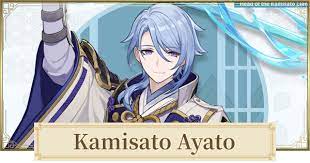 You need to know, Kamisato Ayato is a Hydro DPS character who uses Sword weapons. He is also the older brother of Kamisato Ayaka , Cryo DPS which can rival the power level of Ganyu.

Well, Ayato himself also has an important role in Inazuma. Because, he is the head of the Kamisato clan to replace his parents who have passed away. Then, what are the details of this one character?

Kamisato Ayato's Elemental Skill will give off the illusion of his own shadow that can explode if there is an enemy or its duration runs out. After Ayato uses his Elemental Skill, he will enter the Takimeguri Kanka phase where Ayato's Normal Attack will be infused with Hydro Element .

Meanwhile, Ayato's Elemental Burst will emit a rain of water or a Bloomwater Blade that looks similar to Ganyu's Burst. Meanwhile , Ayato's first passive will give him a Namisen Stack when the illusion explodes.

Ayato's second passive is that he will get 2 Energy if he is off the field . That means, you can easily charge Ayato's Elemental Burst without having to wait for particles from the enemy.

First, prioritize first to raise the level of his Elemental Skill. Because, the DMG of that skill was Ayato's most important strength. After that, you can raise his Burst level.

As one of the new characters, Kamisato Ayato has his own artifact. Yep, it's a 4-Piece Echoes of an Offering. This artifact will raise his Normal Attack to a higher level.

In addition, you can also use the 4-Piece set from Gladiator's Finale which can increase the Normal Attack of the Sword user character. Not only that, you must also have this artifact set.

For now, the Haran Geppaku Futsu weapon is the most recommended weapon for Ayato. Yep, this is his signature weapon that will greatly benefit the user.

Even so, weapons like Primordia Jade Cutter can also be an option for you. In addition, you can also use Mitsplitter Reforged as a third option. For those of you who are F2P, Blackliff Longsword can be a very good option

Well, that's the information about the Kamisato Ayato's build. If you have any questions or anything, don't hesitate to write them down in the column that we have provided.