Irithel is a Mobile Legends hero who occupies the Marksman role with a Reap/Burst specialty. This hero is paired with a Smilodon who always accompanies him wherever he goes. That's why Irithel has a unique ability, namely being able to attack her enemies while walking. So you have to know the choice of Irithel's build hurts.

Even though it has ticklish damage in the early game, but when the game enters the late game, Irithel 's damage is very unobtrusive. Moreover, if you use the Inspire spell, Irithel's Ultimate skill that spreads, can easily make him kill his enemies.

It can be said that Irithel became a hero conquering tanks. Thick blooded heroes during the late game, will still penetrate the damage . In addition, Irithel is a very friendly hero for beginners, because the mechanics of this hero are arguably not too difficult.

Well, before discussing further about Irithel's build recommendation in Mobile Legends . It's good for you to listen to the explanation below. 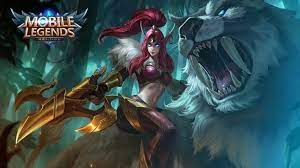 As previously mentioned, Irithel has a skill mechanic that is not too difficult. However, there are some things you should pay attention to when playing Irithel. Like knowing that if Irithel doesn't have an escape skill , it's easy to counter enemy heroes, difficult to do farming in the early game.

Well, in order to better understand how to use the hero Irithel and it can be combined with the sick Irithel build. Please see an explanation of the skills of the hero below.

Irithel and Leo know each other so well that it allows Irithel to shoot while moving. Each Basic Attack deals 3 Heavy Arrows (it takes a while to Reload Heavy Arrows), each Arrow deals 35% Physical Damage (Only the first Arrow can activate the passive skill effect of Equipment ).

Irithel shoots a bunch of arrows, dealing 450 (+60% Total Physical Attack ) points of Physical Damage to enemies in the area and reducing their Physical Defense by 15 for 3 seconds.

Skill 2 (Force of the Queen)

Leo roars loudly, dealing 200 (+60% Total Physical Damage to enemies in the area and slowing them down by 40% for 2 seconds.

Irithel makes Leo jump forward and switch to his Heavy Crossbow for 15 seconds, where his Basic Attack deals 180 (+85% Total Physical Attack ) points of Physical Damage to nearby targets and enemies, and he gains an additional 30 Movement Speed .

Most Marksman heroes do not require skill combos when playing them. One of them is Irithel. As long as every skill points to the enemy, that's enough. You can use skill 2 to give a Slow effect . Then skill 1 to give additional damage and ending with skill 3 to strengthen Basic Attack .

Every player has their own choice of build items, moreover, the selection of items also depends on the hero chosen by the enemy and the situation in the game. If you want to try the Irithel build recommendations hurt from Gamedaim Tips , please listen to the explanation below.

The first painful Miya build recommendation is  Swift Boots . This item will add +40  Movement Speed  ​​and +15%  Attack Speed . Because Miya is a hero who relies on  Attack Speed , this shoe item is perfect for her.

In addition, you can also use Warrior Boots or Tough Boots to reduce enemy hero damage .

The first attack item that must be purchased when using Irithel is Windtalker . Because this item will add +40% Attack Speed , +20 Movement Speed , +10% Critical Chance .

In addition, there is also a Unique Passive effect – Activate: Every time a Typoon is released,  its Movement Speed  ​​will increase by 5% in a short time.

Because Irithel has  a high Critical Damage  , so the  Berseker's Fury item  deserves to be included in Irithel's sickest build recommendation. This item will add +65  Physical Attack , +25%  Critical Chance , and +40%  Critical Damage .

The sickest Irithel build recommendation that should not be forgotten next is Malefic Roar . This item is very suitable for use by Irithel to increase Irithel's Physical Penetration . With the addition of +60 Physical Attack , Irithel's damage will be felt even against heroes who have thick blood.

Unique Passive – Armor Buster: Any Physical Defense the opponent has will increase Physical Penetration by 0.05% when dealing damage to him, limited to 20%.

As a Marksman hero, Irithel is very vulnerable to being attacked by Physical heroes . To overcome this, you can use the Wind of Nature item . Because this item will add +30 Physical Attack , +20% Attack Speed , and + 10% Physical Lifesteal .

In addition to the items above, you can also use the following items: Blade of Despair , Demon Hunter Sword , Athena Shield , Endless Battle , or Immortallity .

For the recommendation for the sick Irithel emblem set, of course using the Custom Marksman Emblem . With the array of Bravery ( Physical Attack +12.00), Swift ( Attack Speed ​​+5.00%), and talent Weakness Finder ( Basic Attack has a 20% chance to reduce the target's Movement Speed ​​by 90% and Attack Speed ​​by 50% in a short time.

Meanwhile, the most suitable battle spell for Irithel at this time is Inspire . With Inspire, Irithel's Basic Attack will be increased. If you want to play it safe, you can use Flicker, Aegis, or Purify.

Well, that's just the information regarding the recommendation for the sickest Irithel build in Mobile Legends 2022