Jawhead is a fighter who has good initiation abilities. In addition to having sick damage, Jawhead also has high durability so that he is able to survive dealing with various heroes. Of course, with such advantages, Jawhaed is difficult to kill, especially if he is solo.

Although Jawhead has various advantages, that doesn't mean Jawhaed doesn't have a counter. You can still counter Jawhead with heroes or items and the counter is also quite easy to use. 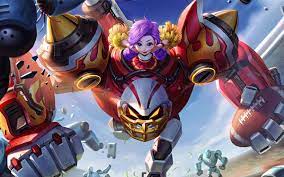 Nana is a mage who is able to counter various heroes, even hero mates. Nana can change her opponent so she can't use basic attacks or skills. In addition, Nana's combo damage is also very large, like a mage in general.

Baxia is indeed very suitable for you to use against heroes who have high durability like Jawhead. Baxia has a passive that can reduce the opponent's shield or regen and that is very advantageous because Baxia doesn't need to buy items. In addition, Baxia also has high durability so he can survive a duel with Jawhead.

Franco can't kill Jawhead solo, but he can prevent Jawhead from locking the core. In addition, Franco's high durability makes it last longer from various attacks.

Heroes like Kaja are really suitable for locking annoying heroes like Jawhead. Jawhead has good initiation skills and is very dangerous for the team. But if Kaja manages to lock Jawhead then Jawhead will fail to lock teammates. In addition, Kaja's damage is also very large and can immediately kill Jawhead.

Diggi has various skills that are very good for the team. The ultimate will give you a shield and CC immune so you can save the team. Skill 2 will mark the opponent and will attract the opponent at the starting point, Ultimate Jawhead will be wasted when locking your teammates.

So that's the best Jawhead ML  hero and counter item , is there any other suitable hero to counter Pharsa?