After experiencing a pretty good buff, Guin is back to being a very annoying hero. Combo Guin is currently not as difficult as it used to be which requires skill 2 to hit the opponent. Guin's damage is also very large, so when the opponent is hit by a combo the opponent can do nothing but surrender.

When fighting Guin it is very difficult because from the early game the damage is already quite large. Now so that you excel when facing Guin, you can use counter heroes and Guinevere items. 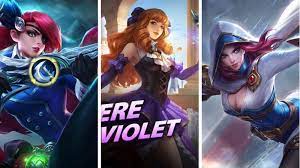 Ruby has always been Ruby's natural counter. Ruby has CC which can easily cancel a Guin combo. In addition, Ruby's durability is also high so it can survive against Ruby.

Diggie will overwhelm Guin, Diggie's ultimate will release all teammates who are hit by Guin's CC knock-up. This will open up opportunities for the team to beat Guin. Without CC, Guin is quite difficult to join the war.

Because Guin has low defense, a hero with big damage like Saber is perfect. The Saber combo is very deadly and most importantly Guin will not be able to escape when hit by the Saber combo.

Natalia has a silent effect which is quite annoying and can even give a silent effect 3 times in a short time. Guin relies heavily on his skills, without skills Guin is helpless. In addition, Natalia's large damage will make Guin disappear in an instant.

In addition to heroes, you can also counter Guinevere with items. Here are Guinevere's counter items:

So that's the best Guinevere ML  counter , is there any other suitable hero to counter Guinevere?