Although the popularity of Argus is not as good as when it was first released, this hero is still quite powerful to use, especially for by one. Argus has a fairly painful damage skill that will make it easier to repay HP during the early game. The other skill can also stun and dash, it's also very annoying. In addition, Argus' ultimate will make him unable to die for some time.

Actually, if players realize that Argus has good potential and can threaten friends easily. Now if you are in the same lane with Argus, you have to be careful or you can use the following Argus heroes and counter items: 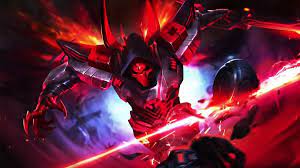 Argus's 1st skill can stun and attract Argus to his destination and that is the first step for Argus to do a combo. In order for Combo Argus to fail, Valir can push and use his combo. Even though Argus' ulti makes him immobile for a while, Valir's burn effect can kill Argus when his ultimate's duration runs out.

Lunox has 2 light and dark modes, in light mode Lunox will have healing skills and the ultimate cannot be hit. While in dark mode, Lunox will have a very large burst damage. So Lunox can dodge Argus' attacks

How to counter Argus with Jawhead is very easy but you can't go wrong. When Argus uses his ultimate, you can activate skill 2 and throw Argus into his own territory. When the ultimate Argus runs out, all you have to do is do a combo and surely Argus will fall apart.

The most troublesome thing about Argus is his ultimate, but Franco can easily overcome that. When Argus uses ulti, Franco can bite Argus and let Argus' ulti be wasted. After that, a teammate just executed Argus.

Just like Franco, Tigreal can't kill Argus if by one. Tigreal only acts as an initiator or blocking Argus. Tigreal has 2 CC skills that make utimate Argus useless.

So that's the best Argus ML  counter , is there any other suitable hero to counter Argus? Write your opinion