Esmeralda is a very strong hero, be it in the gold lane or EXP lane. To kill Esmeralda is also very difficult because it has a very high durability. During the late game Esmeralda was also a problem because it was very thick and sick.

But actually you can easily because there are heroes and special items that you can use. But if you don't know what the heroes and items are, keep on watching the following Hero and Counter Esmeralda: 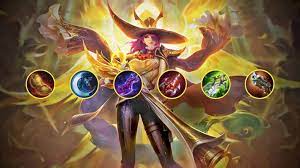 This MM is indeed famous as a tank slayer MM thanks to its passive. Karrie's passive will give bonus damage equivalent to 8-12% of the target's max HP. Esmeralda is automatically frustrated because she has a fairly high HP, especially during late games.

Esmeralda has a high Shield and that makes it very difficult to kill, but not with Baxia. Baxia can reduce Esmeralda's shield and regen quite high and when combined with dominace ice, Esmeralda will be very thin.

Kagura has a very large burst of damage and can spend the enemy's HP in an instant. In addition, Kagura also has an escape skill which is very useful if the combo fails to eliminate Esmeralda.

Even though Hylos has high defense, it doesn't apply to Dyroth because Dyroth can eliminate the opponent's defense. Besides that, Dyroth also has a vamp spell and makes him strong by one with Esmeralda.

So that's the best Esmeralda ML  counter , is there any other suitable hero to counter Esmeralda?