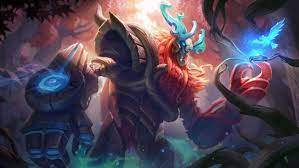 Since experiencing a revamp and various buffs, Belerick is now a tank to be reckoned with. Belerick is very thick and hard to die even though he is beaten, plus his passive that can make you die first. In addition, Belerick's taunt skill is very troublesome, especially during war.

Even though Belerick is quite OP, Belerick still has the counter, if you use the counter then Belerick will be very easy for you to kill. Do you know what Belerick counters are? If not, read on!

Gusion is capable of dealing enormous burst damage in a short duration. With this speed, Belerick users are sometimes late in responding, during late game Gusion's damage will be greater, especially if using a magic pen.

Just like Gusion, Eudora also relies heavily on his burst damage to counter Belerick. But the difference is that Eudora is easier to use even for beginners. Even so, this one hero cannot be underestimated because of the great damage that made him a subscription to the tires of his time.

Hercurt also has enormous burst damage even in the early game. In addition, Helcurt can darken maps and give a silent effect so that the opponent can't do anything.

You can indeed use Nana to counter various heroes except those who are immune to CC. Nana's 2nd skill will make Belerik unable to use the skill and it will provide an opportunity for the team to kill Belerick.

So that's the best Belerick ML  Hero and counter item , is there another suitable hero to counter Belerick? Write your opinion.