Furthermore, Ayaka 's team itself is very diverse. Starting from Reverse Melt to other teams. To be clear, the following is an explanation of the team that Ayaka can occupy. 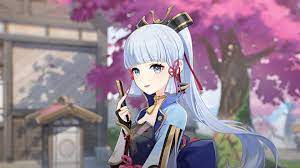 For those of you who don't know, Kamisato Ayaka himself is one of the most powerful Cryo DPS in Genshin Impact. The strength of Ayaka itself is almost equal to Ganyu, the current number one Cryo DPS.

Unlike Ganyu , Ayaka is a Sword user character. Even though using Sword, Ayaka's DMG is quite large. This is certainly different from most other Sword characters who act as Support.

Furthermore, Kamisato Ayaka will be stronger if accompanied by Mitsplitter Reforged, Ayaka's Signature Weapon. For those of you who want to maximize the potential of this character, of course, you must have this weapon.

For those of you who want and already have Kamisato Ayaka, here are some Freeze Teams that you can try. First, you can combine Ayaka with Shenhe, Mona, and Kazuha. The ideal rotation is: Kazuha E > Kazuha Q > Shenhe E > Shenhe Q > Mona Q > Mona E > Ayaka E > Ayaka Q.

In addition, you can also use character compositions such as Ayaka, Rosaria, Kokomi, and Kazuha. The recommended rotation for this team is Ayaka's dash (hold E) > Kazuha Q > Rosaria E+Q > Kazuha E (tap) with a plunge > Kokomi E > Ayaka E + Q.

Lastly, there are Ayaka, Diona, Mona, and Kazuha. With this team, you can get Shield and healing from Diona. In addition, Diona also plays an important role as a Battery for Ayaka.