by budi
If you're an exp lane user , you've definitely had to deal with things. This one fighter hero does have great durability and easily dominates the lane. Not only during the early game but during the late game Lapu-Lapu poses its own threat, especially during war.

Because the threat from Lapu-Lapu is quite influential, you need to use the right counter. If you don't know what Lapu-lapu counters are, here are Lapu-lapu's heroes and counter items. 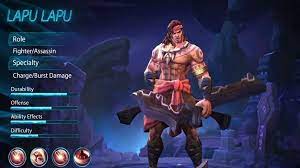 Lapu-lapu has a strong resistance thanks to a passive that provides a shield. But that's not the case for Esmeralda, because the more shields your opponent eats, the more Esmeralda gets crazier.

Dyrtoth is very suitable for you to use to counter heroes with high defense such as Lapu-Lapu. In addition to having a high regen, Dyroth also has very painful damage thanks to his opponent's defense reduction skills.

Lapu-lapu relies heavily on skills rather than basic attacks, so Nana is perfect for you to use to counter Lapu-lapu. Nana can turn Lapu-Lapu into Molina so she can't use basic attacks or skills.

Argus is one of the strongest by one specialist heroes thanks to his ultimate. But if during the early game you are not careful then you will be slaughtered. During the late game, of course, Argus has great damage and will survive the duel with Lapu-Lapu.

Even though Franco can't kill Lapu-Lapu solo but Franco is able to make Lapu-Lapu kuwalah. If Lapu-lapu is hit by skill 1 and Franco's ultimate. Lapu-lapu can only surrender to luck.

In addition to heroes, you can also counter Lapu-Lapu with items. The following are Lapu-lapu counter items:

So that's the best Lapu-Lapu ML  counter , is there any other suitable hero to counter Lapu-Lapu? Write your opinion.