3 Characters That Match The Unforged's Weapons

Genshin Impact 2.6 will start their phase 2 in a few days. In phase 2, HoYoverse presents Ayaka 's banner and weapons. Especially on the weapons banner, the developer brings back The Unforged, one of the underrated weapons .

Furthermore, there are several characters who can use this one weapon. Who are they? Let's see the following article to the end. Don't forget to share it with your friends too. 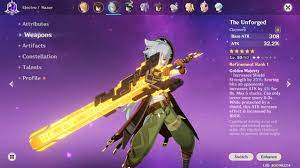 The Unforged itself is a 5-star Claymore that does look unique and can only be used by a few characters. Because, characters who use this weapon must be protected by a Shield to take advantage of all existing passives.

When a character hits an enemy, it can trigger a 4%/5%/6%/7%/8% increase in ATK for 8s. It can be triggered every 0.3 seconds and a maximum of five stacks can be earned. When the character is protected by a shield, the ATK increase is doubled.

There are currently several characters suitable for using The Unforged. Some of these characters are:

Beidou is a character who can take advantage of The Unforged's own passive. This 5-star Claymore will increase Beidou's Elemental DMG through his skills. Beidou is most effective when he takes on the role of DMG Dealer with Elemental Burst.

The ATK% increase from The Unforged is a great way to increase DMG along with the passive which also increases DMG power to defeat enemies.

Noelle is a very underrated character. However, with C6 Noelle's strength is on par with some 5-star characters. Her own skill can produce a Shield that lasts for 12 seconds.

Although the cooldown of the skill is 24 seconds, this can be reduced thanks to one of his passive talents . With Unforged, Noelle can have a stronger Shield and focus on attacks.

Xinyan is the most neglected Claymore character in Genshin Impact. He can create a Shield with Elemental Skills but this is the weakest skill in the game.

With the help of The Unforged, Xinyan can not only strengthen her shield but can also deal more DMG to the enemy. Because one is passive, staying protected by a shield will also increase Physical damage by 15%.

Well, those are some characters that are suitable for using this weapon. If you have any questions or anything, don't hesitate to write them in the column we have provided.