Since its release last Tuesday, Sangonomiya Kokomi's banner has recorded such a pathetic income. How not, he became one of the characters with a fairly low total sales.

Of course, it's not without reason why the Kokomi banner is considered unsold by Traveler Genshin Impact . Noted, there are several things that make Kokomi's sales not so good to this day.

Based on statistics released by a Reddit user named Mr.Duck, he shared data regarding the sales of each character in Genshin. It was noted that Kokomi was only able to earn 1 million Yuan or around Rp. 2.2 billion. Obviously, this is a very low number for an event character.

Just for the record, this is Kokomi's income on the first day. However, it is certain that Kokomi's banner is not very profitable for miHoYo . Of course, there are several reasons why Kokomi is not selling well. 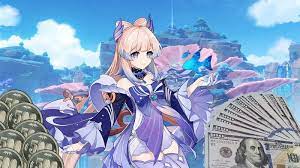 You need to know, Raiden Shogun currently holds the title as one of the characters who have the highest income in Genshin Impact. Noted, some players choose to spend their Primogem to target their weapons and constellations .

In addition, the Kokomi kit itself looks less clear. How not, his position as a healer is quite certain. However, the constellation he has actually leads to DPS. Of course, players feel that there is something wrong with Kokomi.

Although it is uncertain, rumors about the presence of one of the Big 3 Liyue, namely Hu Tao in Genshin Impact v2.2, could trigger the decline in Kokomi's income.

Despite losing money on Kokomi's banner, in fact miHoYo has benefited greatly from Raiden Shogun's banner. So, it seems miHoYo will not have a problem with this.

Moreover, they themselves have recorded a return on investment based on several reports released by local media.

What do you think about the income from Kokomi? Let's write in the column we have provided, friends.