This is the list of 9 Mobile Legends Skins for March 2022, there is a Silvanna Collector

Every month Moonton always presents the latest skins for every hero in Mobile Legends. Entering the new month, many players are curious about which hero skins will be present in March 2022. Well, to find out, the following Gamedaim List summarizes information about the March 2022 Mobile Legends skin list.

Maybe some of you have heard of the leaked skins that will be coming this month. Call it maybe like Beatrix's Starlight skin, Silvanna's Collector skin, and the presence of a new hero named Xavier. But it turns out that it's still three of the 9 list of skins that you can have.

So, what are the nine Mobile Legends skins for March 2022? Just take a look at the information below. 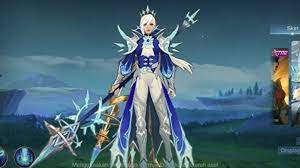 As the name implies, this skin carries the theme of space explorers. At first glance, it looks like the Starlight Clint skin, but has a different theme. It looks like Beatrix has a beautiful appearance with a costume that is dominated by white, black, and blue colors. Meanwhile, her hair color changed to orange.

From a long time ago, we have known that Mobile Legends is collaborating with Sanrio Characters. This collaboration will present 4 cute and cute skins that will be given to Chang'e, Floryn, Angela, and Claude.

The four skins will be immediately presented in the Limited-Time Themed Draw Event which will be present on March 5, 2022 . Meanwhile, event quests will be available on March 12, 2022.

The next March 2022 Mobile Legends skin is Silvanna with the skin name Queen Frost . This skin will be in the Collector category which can be owned by participating in the Grand Collector event which will be present on March 8, 2022 . You have to prepare a large number of Diamonds, because each Collector skin is definitely expensive.

With a luxurious appearance, it looks like Silvanna has a color that is dominated by blue and white. From the name, most likely this skin will have an ice theme, where Silvanna is the ice queen. Silvanna also looks very beautiful in a blue and white costume and is equipped with a crown.

Grim Stranger is a March 2022 Mobile Legends skin that you shouldn't miss. This is a skin that was released in a certain event in 2020. If you don't have it yet, this March, you have the opportunity to get this skin. But unfortunately for the date is still not known for sure.

Natalia's skin in the Special category is very worth it for you to buy. Because it looks very futuristic and the theme that is carried is different from the previous Natalia skin.

On March 22, 2022 , we will have a new hero who has the Mage role. For every new hero released, of course it will coincide with the Normal skin that is presented. Xavier will get his first skin called Verdict of Light.

You can buy it for 269 Diamond. In addition, you can also get a discount if you have a Diamond discount.

Within 23 days, to be precise on March 26, 2022 , we will enter the latest Season of Mobile Legends, namely Season 24. Where for every player who reaches a certain tier will get an exclusive skin. The Season 24 Mobile Legends skin will be given to Masha's hero with the name Spirited Gauntlet .Seen from the picture above, this skin has a pretty cool appearance. Where Masha's hands are covered by orange romot armor.

You must buy this latest Bane skin as a Mobile Legends skin in March 2022. The low price, which is only 100 Diamonds, is one of the reasons you should have it. This Elite category skin will be available as an exclusive skin for the first purchase of Season 24 and will be available on March 26, 2022 .

The next March 2022 Mobile Legends skin is Aries . Aries is Hilda's skin who is part of the Zodiac Mobile Legends squad. According to the original zodiac, Aries is a star that runs from March 20 to April 20 . So, to have it you have to collect the constellations at the Zodiac Summon event.

If you don't have the skin yet, this is your chance to get the skin. Especially for those of you who want to collect Zodiac squad skins.

Previously, the SABER Squad got the latest skin given to Freya (SABER Manhunter). VENOM skins. doesn't seem to be left behind, where is the hero who gets the VENOM squad skin. is Dyrroth ( VENOM Cobra ). As for the release date, it is still unknown, but is expected to remain in March 2022.

This skin has the same theme as the previous VENOM skin. Dyrroth looks more terrifying and different from the previous skins which feature Dyrroth as a demon.