The Story of Valentina Mobile Legends: Falling Into Dark Magic

Valentina is a Mobile Legends hero who occupies the Mage role. Since its appearance in the Land of Dawn, this hero has attracted the enthusiasm of many Mobile Legends players. Because he has a skill that can imitate the enemy's Ultimate skill. So you have to know the story of Valentina in Mobile Legends .

Thanks to this ability, Valentina immediately transformed into a hero that the players wanted. Because of being overpowered , in some cases this hero is often banned in ranked matches and tournaments.

Valentina's story in Mobile Legends is truly heartbreaking and sad. Because he had to be willing to lose his lover and in the end fell into dark magic. So, curious about the full Valentina story? Just take a look at the information Gamedaim Tips have summarized below. 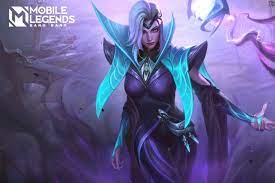 The Story of Valentina Mobile Legends

House Paxley ruled the area near Lantis Mountain to the south of the Moniyan Empire . Generations of this family had guarded this area for the Moniyan Empire, in order to defend against the Abyss attacks with magic and swords.

As the eldest daughter of the House Patriarch , Valentina had been given high expectations since she was born. He underwent rigorous training and grew into a haughty perfectionist, the heir most qualified to lead this manor.

As he grew older, he went to the frontier and helped repel wave after wave of invading demons. The news of victory at Lantis Mountain was the only thing that could calm the minds of the residents.

In search of allies, Valentina went to Moonlit Forest alone even though the Empire had long been enemies with the Elves . The Elf King , namely Estes , refused Valentina's request. He said that the Elves had no interest in human warfare.

An Elf hero named Irlan , however, was moved by Valentina's sincere words. Unlike Estes, he believed that with the fall of the human kingdom, the destruction of the Moonlit Forest would also be imminent.

After a heated argument, Irlan followed Valentina out of Moonlit Forest with his friends. Elves and humans have since fought together on the Lantis Mountain battlefield.

Loved For The First Time

After spending day and night with Valentina, risking their lives, Irlan realized that he really loved Valentina. But Valentina is confused when Irlan confesses his feelings to her.

She had always been taught that a noble woman should not indulge in an unreasonable romance, and that she should marry someone of equal status for the sake of her family.

However, Irlan's passionate love awakens the feelings that are hidden deep in Valentina's heart. He felt the immense joy of being loved by someone for the first time.

Just as Valentina pretends not to be in trouble but isn't really sure how to respond, Irlan seizes the opportunity at Paxley's House election meeting and proposes that he is willing to fight under Valentina's command along with the other Elves on a permanent basis.

But with one condition, that is Valentina must agree to his marriage proposal. The suggestion from Irlan solved the problem that was bothering Valentina perfectly. Now he can follow his heart and accept Irlan's feelings for the sake of his family.

Then they shared a sacred oath under the bright moonlight, and Valentina became the leader of their house as the rest of the family cheered happily.

But among the crowd, his uncle remained silent. The position should belong to him according to the family rules.

With the help of the Elves, House Paxley gained strength every day, and Valentina was awarded the title ' Duchess ' by the Moniyan Empire. And he also relied on Irlan who showered him with love. Accustomed to dealing with death, Valentina finally tasted the sweetness of life.