Despite getting a buff, Layla's popularity among Mobile Legends players is still low. Because this Marksman hero has many shortcomings that are not effectively used in this season. For example, like thin blood, has no escape skills, and is easy to kill. 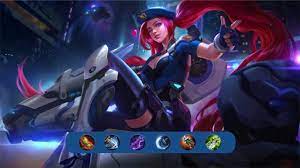 However, Layla is very useful when the game has entered the late game . Especially with the range of his Basic Attack which is quite far. So that the team that was initially always under pressure, could make an epic comeback . The most important thing is that Layla must be covered , and let her do damage freely.

Well, before discussing the recommendations for Layla's sickest 2022 build, it's a good idea to listen to the explanation we have provided below.

Please note, Layla is a very weak hero in the early game . He must do farming first to collect the items. So, if you play as Support or Tank, try to help Layla do farming .

The use of Layla's skills in Mobile Legends is very simple. All skills can also be combined, so it can easily kill enemies who have a short skill range. Layla is very comfortable dealing with other Marksman heroes, such as Wanwan, Miya, Hanabi, and maybe Beatrix.

Well, in order to understand how to use the skill and it can be combined with the sick Layla build. It's a good idea to listen to the explanation below:

The damage from Layla's basic attacks and skills will increase with the distance between her and the opponent from 100% to 140% (reaches maximum at 6 Yards).

Layla shoots a Malefic Energy Bomb forward, dealing 200 (+80% Total Physical Attack ) points of Physical Damage to the first enemy she hits. ( This damage can be Critical ).

Layla shoots an energy ball that explodes, dealing 170 (+65% Total Physical Attack ) points of Physical Damage to targets and enemies within a certain distance, slowing them by 30% for 1.2 seconds.

He will leave Magic Marks to the enemies he hits. When Layla hits an opponent with a Magic Mark, she will deal 100 (+35% Total Physical Attack ) points of Physical Damage to nearby enemies and slow them down by 30% for 1.2 seconds.

Passive: Increases distance from Void Projectile and Basic Attack by 0.6 Yards. Slightly increases Layla's visibility after each skill Level Up.

As mentioned above, Layla can perform skill combos to kill her enemies. You can use skill 1 to deal damage and movement speed . After that, you can do damage with Basic Attack or skill 2 to give a Slow effect . And ends with Ultimate skill , if the enemy is far from reach.