Chou has various advantages such as high durability , strong CC and flexible build. These advantages make it difficult for his opponent to kill him, even Chou can easily lock the opponent's core. Such an incident would certainly be very detrimental to his opponent.

Actually there is a way so that you can easily face Chou, you can use Chou's hero counter or Chou's counter item. With these counters Chou is guaranteed to cry. 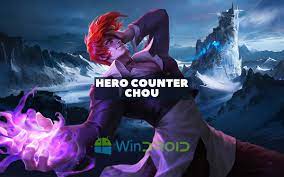 Lunox is famous for its high burst damage and durability. In addition, the ultimate Lunox in light mode can avoid Chou's various attacks. After Chou fails to do a combo, you only need to counterattack but keep the distance.

Kaja really can't escape Chou's ultimate. But Kaja can lock Chou first and provide an opening for friends to attack Chou. But if Kaja is full damage, he can kill Chou in one combo.

Phoveus is indeed very powerful to counter heroes who have escape skills like Chou. Wherever Chou runs, Phoveus can easily catch up to him and most importantly the damage and durability of phoveus is very high.

Wan-wan has a skill that makes her immune to any CC. Wan-wan's suit is off and Chou's distance is very close, it will make it easier for Wan-wan to attack to activate her ultimate.

To defeat Chou with Eudora, you have to do a surprise attack so Chou doesn't have time to respond. Eudora's stun will prevent Chou's response and his burst damage will finish Chou.

This bald hero is really annoying, the Paquito combo is able to prevent the use of the opponent's skills. In addition, the combo damage is also very large and can kill Chou easily.

You can also counter Chou with items, here are Chou counter items:

So that's the list of the best Chou heroes and counter items   . Are there other counters?