Starting in March 2022, the Video Game Industry seems to be starting to look bigger than in previous years. This is evident from the release of the latest PC games and several Next-Gen console games with stunning graphics. As if you don't want to lose to last month, we will summarize what games you can choose at will this month. Here is a  list of 10 cool games for  March 2022 that are ready to be released.

At the beginning of 2022 we have got a lot of big game lineup especially for Console. You haven't heard wrong, because there are several games released by Sony and Nintendo that have finally returned to enliven this year. In addition, in  this Gamedaim List  , most of the games released are  AAA class games . What games are there about? Let's follow the discussion. 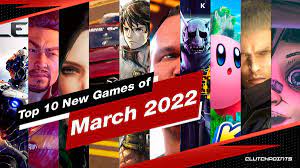 Babylon's Falls  is a Hack n Slash game by developer studio  NieR Automata . This game will offer an Action RPG concept that brings an action-packed Co-Op 4 Player experience. You will use a large selection of weapons and Magic powers to fight various monsters. Yup, you can also play Single-Player to enjoy the various available modes.

This iconic Racing game from Polyphony Digital and Sony comes with super indulgent visuals. You will be invited to travel around the world to master various circuits with a choice of up to 420 cars. Not only that, the game is rumored to bring Time and Weather Simulation features that make it appear like the real world. Any changes in the weather will affect the racetrack and your car mechanic.

Developed by Square Enix, Project Triangle is a game that brings back the mechanics of Turn Based Tactics like Final Fantasy Tactics. The difference is, this game appears with HD-2D graphics. If you have ever played the game Octopath Traveler, surely you are no stranger to the ArtStyle offered. The stories they adopt themselves will be different from the previous series, but still in the same Universe.

This one is arguably a full game scale expansion. Coming from Ubisoft, Assassin's Creed Valhalla: Dawn of Ragnarök will invite players to adventure as God Odin. You have a duty to save Odin's son Baldr in order to stop the apocalypse of the Norse gods called Ragnarok. The world and the themes they present will appear like God of War.

After a year of silence, the long wait for the release of the iconic 2K games is finally over. On this occasion Wrestler fans can again enjoy the excitement of WWE matches. Different from the old games, this series will provide various match customization features. One of them is MyGM and MyFACTION mode. From here players will be given the freedom to create their own Roster, Brand, Arena, Special Event, Mode, and others.

Like the title they adopted, this latest  Final Fantasy series  will tell the origins of the conflicts that occur in the entire franchise. Developed by Team Ninja and  Koei Tecmo , this series manages to provide a darker atmosphere than the previous Final Fantasy series. Even more interesting, the series will also offer a Souls-Like-style Combat concept.

Atlus and Arc System Works have finally  released  one of their iconic games to Steam with the help of SEGA. Following the previous series, they will provide a new port again for one of the iconic series from the Persona franchise. Different from the Persona games we usually encounter, this series will offer a Competitive Fighting concept instead of a Turn-Based RPG. Portions of PS4 and Nintendo Switch apparently also got a share.

Developed by Tango Gameworks, Ghostwire: Tokyo is a Survival Horror game mixed with First-Person-Shooter action. Yup, this game looks like  DOOM  but with a more Fantasy approach and a more Modern theme background. More than that, this game also offers a disturbing visual world with various Dystopian Techno elements that are quite strange.

Continuing the latest news from Gearbox Software, on this occasion they are ready to release the newest Borderlands Spin-Off game. Instead of telling the adventures of the Vault Hunters, Tiny Tina's Wonderland invites you on an adventure in the super weird dreams of the iconic character 'Tina' who is famous for her Maniac nature. What's more, he will be accompanied by a new character that is no less funny.

10. Kirby and the Forgotten Land

Lifting the Post-Apocalyptic Setting, we will go on an adventure together with a cute character named Kirby. In his newest game. Nintendo  has succeeded in bringing up the 3D Platformer Adventure concept with pampering and colorful visuals. As seen, Kirby is mysteriously stranded on an island infested with Monsters. He finally began an adventure to find a way out of the island.

As a result, that's all our list of  10 cool games  ready for release in March 2022. What do you think, what game will you play in early 2022? So, don't forget to write your opinion in the comments column. Good luck!